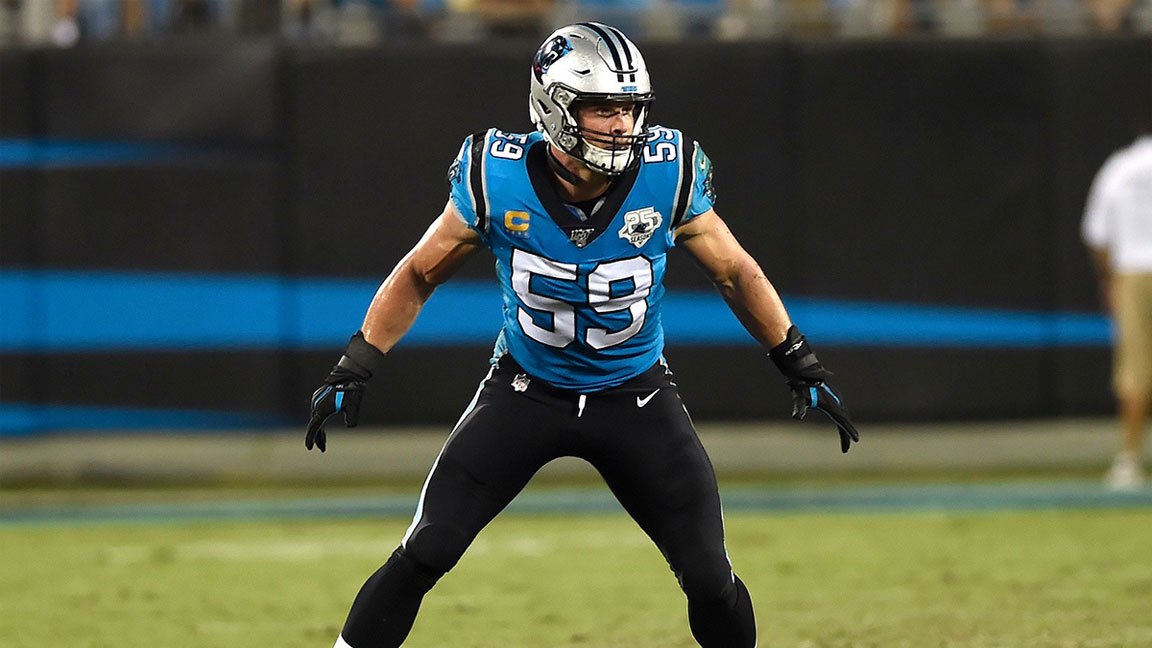 NFL stars like Carolina Panthers linebacker Luke Kuechly start training for the next season as early as April. And by the time they hit August’s training camps, they’re going full-tilt in the weight room to not just get fit for the coming games, but to build strong bodies that last for seasons.

UPDATE: Kuechly announced in January 2020 that he is retiring from the NFL at age 28: “There’s only one way to play this game since I was a little kid — play fast, play physical and play strong,” Kuechly said. “And at this point I don’t know if I am able to do that anymore. That’s the part that is the most difficult.”

As camp approaches, Kuechly, a three-time All-Pro, splits his week between heavy lifting and explosive power work, followed by tons of lean protein (Kuechly just joined the board of Eat The Bear, a sports nutrition company that’s also based in North Carolina). “Putting on weight and keeping it on is important, so I’m a big post-workout protein and branch-chain guy,” he says.

His other secret weapon — besides protein — is this workout, designed by Panthers strength and conditioning coach Joe Kenn. “This routine challenges every muscle in Kuechly’s upper body,” he says.

While Kuechly and his teammates are physical beasts, their workouts (like this one) don’t focus on building a one-rep max or pushing the biggest weight possible. “What’s heavy for me when I lift, probably isn’t actually a lot of weight,” says Kuechly.

We doubt the 6’3″, 240-pound linebacker’s weights are unimpressive, but Kenn explains that the team focuses on heavy but submaximal loads because the real focus is to develop long-term muscle function (so they can play longer) rather than hitting a number that looks amazing on paper. “Most football players enter the pro ranks after a structured college program that is geared toward improving the one-repetition maximum of several foundational movements,” he says. But, “as the NFL athlete’s career longevity increases, we feel it’s beneficial for our athletes to handle submaximal loads for longer periods of time and handle higher loads longer into their careers.”

That’s a wise philosophy for any gym rat, but the upper-body workout Kuechly shared with us (courtesy of Kenn) is still absolutely brutal. Use weights just heavy enough to fail on your last set. Take up to two minutes rest between. And start with at least 10 minutes of warm-up. Kenn recommends a mix of easy shoulder, neck, and core moves.

Lat Pulldown
Sitting on a bench, reach up and grab the bar. Pull down, being sure to use your lats, not your hands or wrists to move the weight. Stop at the top of your chest, then return to the beginning of the motion. Kenn says to aim for 3–4 sets of 10 reps each.

Oscillating Overhead Press
For this move, Kenn fastens two kettlebells (same weight) to either end of a barbell using rubber exercise bands. The idea is that the weight isn’t stable and challenges the shoulders to control the bar. Start standing with the bar at your chest and press up. Do 3–4 sets of 6–10 reps.

Dumbbell Overhead Press
Your shoulders will be fatigued from the previous move but stay strong through these sets too. Aim for 3 sets of 8 reps.

Russian Kettlebell Swings
With your feet slightly wider than your shoulders, hold a heavy kettlebell in both hands between your legs. Keeping your back flat, sit back and hinge at your hips and use your legs and butt to swing the kettlebell up, stopping at chest height. Do 2–3 sets of 10–20 reps.

Kettlebell Lateral Squats
In a wide stance, hold a kettlebell between your legs. Bring the kettlebell toward your right foot while bending your right knee, careful to keep the right knee behind the right toe. Straighten your leg, then shift the weight to your left side. Repeat, doing 6–8 reps on each leg and 2–3 sets total.

Kettlebell Lateral Raise
With a light kettlebell in each hand, stand straight up with your core engaged. Bring the weights out to the side and to shoulder height, keeping your arms straight. Lower the weights and repeat. Do 2–3 sets of 12–20 reps.

Search for More from author
Workouts

Rules of workout in the summer heat.

Benefits of the outdoor workout.