On Tuesday, sports fans were lucky enough to see an unusual race. Two legendary athletes decided to make a challenge. Their entertaining competition was filmed and published on January 28 under the name Runner vs. BASE Jumper – The Romsdalshorn Challenge. Kilian Jornet and Eric Hayman are trying to resolve the eternal question of who is faster. 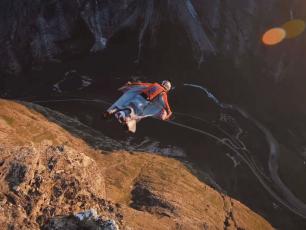 The essence of the competition was that both athletes begin their movement simultaneously and from one point. Their goal is to reach the peak of Romsdalshorn with a height of 5,085 feet. At the same time, Jornet fled to the finish line, while Hayman used the via wingsuit.
Thanks to his equipment, Heimen was able to reach a speed of 137 miles per hour. This helped him come down easily, but then he was dragging all this equipment to the top. At this time, Kilian Jornet, using his skills as a professional runner, came down a bit later, but then he started lifting without unnecessary load. It is worth noting that Hayman has extensive experience in sports, too, and is one of the most experienced BASE jumpers on the planet. He holds the world record for most vertical meters in 24 hours (66,000). Jornet is a six-time Skyrunner long-distance running world champion. And he also conquered the peaks of Matterhorn, Mont Blanc, and Everest.
The confrontation between the two Norwegians caused great interest even for those who are far from sports. An exciting adventure in an incredibly beautiful place can not leave anyone indifferent.
If you are interested in who won, find 10 min and watch the video. You will be delighted.

How to support spinal health.