Over the past few decades, people have begun to suffer from imposed beauty canons, which has led to the emergence of eating disorders in both women and men. Although, women tend to be dissatisfied with their appearance more than men are. However, in economically developed countries, the number of men with eating disorders is increasing significantly every year. Scientists call anorexia one of the most common types of eating disorders. 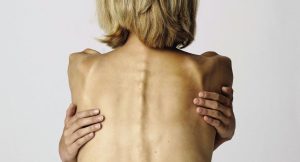 This disease occurs not only in adolescents who are critical of their bodies, but also in adult women and men bring themselves to an extreme degree of exhaustion. It seems to him or her that even one centimeter of their body is superfluous, and they look at themselves as fat people even with a critical lack of weight. Food is their main enemy. However, they are not worried that refusal to eat can cause serious illness and even death.

Their main goal in life is to reduce the weight and shape of their body. In doing so, they use various methods to achieve their goal. They can refuse food; take drugs that induce vomiting, laxatives, and other drugs that help excrete food without assimilating it.

At the same time, women aged 14 – 35 years old suffer from anorexia more often. The cause of anorexia can be a disruption of the hormonal system or severe stress.

Treatment options depend on the cause of anorexia. The doctor determines the type of anorexia, and then they can prescribe adequate treatment. The most common types of anorexia are nervous, medication, and psychological.

The reasons for the development of anorexia.
Each type of anorexia has its causes and symptoms.

The cause of mental anorexia is the presence of diseases such as schizophrenia, paranoia, or depression. A person cannot control obsessive states, and even a gram of fat on their body causes fear and rejection. Also, the reasons for the development of anorexia can be psychological trauma, physical or sexual abuse, perfectionism, self-doubt, and so on.

Symptoms and signs of anorexia.
Unfortunately, a person with anorexia denies he/she has such a disease, and therefore the reaction of loved ones to what is happening is very important. If you notice that your loved one, friend, relative, or colleague has drastically lost weight to a critical state, has brittle hair or nails, suffers from constant headaches or fainting, menstruation disappears in women, and then you need to convince him/her to go to the doctor.

In this case, the patient with anorexia will convince you that everything is fine with him/her, hide his thinness or other manifestations of anorexia. If you observe the behavior of a person suffering from anorexia closely, you may notice that he/she is using a diet with strict restrictions, constantly counting calories, controlling weight, and increasing it even by 100 grams will cause an attack.

Very often, people with anorexia do not swallow food but chew and spit it out.

If you notice that a loved one has lost more than 20% of their body weight for no medical reason too fast, then he/she may be suffering from an eating disorder.

Just a doctor can determine what weight is a sign of anorexia.
It is necessary to consult a doctor if you notice signs of the development of the disease. The doctor chooses a method of treatment that depends on the reasons for its occurrence.

As a rule, the treatment of anorexia is a complex method that includes medication, psychological assistance, proper diet, and family therapy.

On average, the duration of the course of such treatment can be from three to eight months. But after course, a person needs support and restoration of strength, so he will have to get used to the new rules of life. The support and love of the people around you will make this process easier.

NFL Combine 2022: QBs on the Rise, Elite Cornerbacks, and One Very Fast Lineman