Many countries have begun the process of vaccinating their citizens to reduce the spread of COVID-19. However, not all citizens agree with their government’s plans.
Some of them are radical and ready to protest against vaccination. 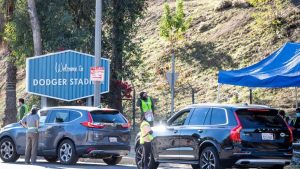 The protest took place in Los Angeles. Opponents of vaccination blocked the operation of the largest vaccination station located at the Dodger Stadium in Los Angeles. As a result of the protest, the vaccination station was closed. About 50 people took part in the protest. They blocked the entrance to the stadium, which led to the formation of a queue of hundreds of cars. Protestants called for the removal of masks, and argued that the news about the COVID-19 pandemic was false. Protestants held posters with appropriate appeals and handed out leaflets in which they tried to convince people that COVID-19 isnot exists, and it is only manipulation by the authorities. The police did not use physical force against the protesters, so no one was hurt. Also, none of the protesters was detained.

California Governor Gavin Newsom expressed his opinion on what is happening on Twitter, and said that no one can interfere with the vaccination process. He stated that Dodger Stadium is back in operation.

The right approach to training allows David Boreanaz to be in great shape.